We Need To Talk About Kevin is an epistolary novel in which Eva Khatchadourian (Kevin’s mother) recapitulates the story of Kevin’s life – from the point on at which she and her husband decided to get a child, during her pregnancy, Kevin’s childhood and adolescence until the day she now only calls Thursday, when Kevin did something so horrifying it changed the life of his family (and not only theirs) forever.

I have to admit, I went into reading this book with completely erroneous expectations as to what the novel was going to be about. One reason might be the fact that I was reading it as part of the „syllabus“ of the #YearOfHorror bookclub established by chapterstackss on youtube – hence, I was expecting it to be a horror novel, which for me always includes a supernatural element, otherwise I personally tend to classify it as a thriller. Therefore I assumed that the eponymous Kevin would be a boy possessed by a demon or some other external force that made him evil. Instead, the story does not offer a clear-cut explanation for Kevin’s behavior, be it psychological or supernatural. The reader is confronted with a cruel and sadistic character treating the people around him with intelligent malvolence. Just because.

Kevin seems to be carrying with him a great deal of coldness and hatred towards the world has such and especially his mother even as a baby. In the years to follow he does not only scare away one nanny after another but also every potential playmate and their parents. The only one not creeped out by him is his father, who clings to seeing his son as the perfect all-American boy with whom he can play baseball and visit history museums. Kevin’s capability to keep up this illusion of the ideal son works to underline the inventive cruelty with which he treats other people – even his little sister, who, after all he is doing to her, still puts childish trust and loyalty into him.

There are scenes in this book which will probably haunt me for years to come, and at times it was difficult for me to continue reading because I was already preventively horrified of what Kevin would do next; afraid of how Kevin always managed to find out what exactly could be the worst thing he could do to a person. Regardless, We Need To Talk About Kevin has become one of my favorite books, because it is so much more than simply a mindless stringing together of sadistic acts!
This novel made me be immensely emotionally involved and made me feel for people, all of which are not even really likeable. Lionel Shrivers way of writing is dense and at times complicated (our letter writer, Eva, is intellectual bordering on pretentious, and her letters and choices of words display this excellently), she oscillates between writing out cruel truths bluntly and directly and hiding them between the lines. In this way, the book pulled me in, and as hard as it sometimes was to read on, it was even harder to put the book down.

So many topics are mentioned in the book, like motherhood, guilt, responsibility, American-ness, and so many different opinions on said topics that it provides endless food for thought. All in all, We Need To Talk About Kevin goes far beyond being „just“ a book about a priviledged teenager committing a massacre and I highly recommend it!

Some years ago I was quite a big fan of her Grant County series, but after [SPOILER —] Jeffrey was killed I angrily chose to ignore her writings for a bit…

cop town, though, made me very glad that I stopped sulking and picked up a book by Karin Slaughter again! I immediately remembered why I used to love her books and I definitely agree whenever I read that she is claimed to be one of the best thriller writers around.

cop town is more than a mere thriller, though. The novel takes places in Georgia, Atlanta, in 1974; it is a story about the suffocating atmosphere in a town with extremely conservative views on women, people of color, jews, gays – minorities in general. The reader accompanies two women, Maggie and Kate, trying to make their way in a police department dominated middle-aged straight white males who have a hard time accepting women as their colleagues.

As if it wasn’t enough that those male officers try to make their job as hard as possible, both protagonists have a lot to handle besides police work.

Maggie is the third police officer in her family. Both her uncle and her brother work at the same department as her and won’t even stop putting her down at home. Things get even more complicated when her brother seems to lie about some aspects of his meet-up with the cop killer the whole force is looking for.

Kate may come from an overall supportive family but they still make it quite clear that they would like her to have a less risky job. Additionally, she is still dealing with the death of her late husband; furthermore she is being stalked by a creepy stranger into whose mind the reader gets some glimpses.

The book is dripping with an atmosphere of violence and prejudice. While it does not hold the thriller-typical suspense I expected, I enjoyed it even more than I had thought I would. Maggie and Kate are real, believable and totally badass characters. It was an interesting experience to dive into this world, at times seeming as if from a violent and prejudiced past, but, of course, all the more real today. 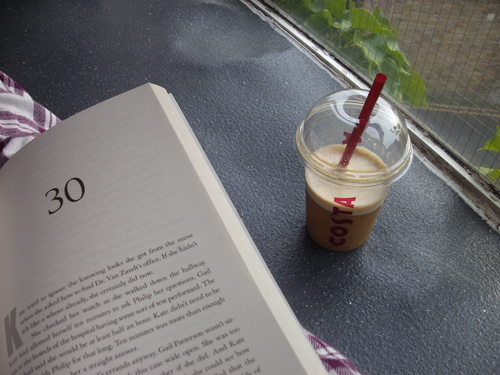 Where I Never Shut Up: